Ari has been practicing bodywork for 20 years.  His interest in bodywork however started when he was a kid.  Ari was the one the family went to for their “back rubs”.  He seemed to always have a knack for the work. No one knew at the time but he was destined to be a bodyworker.Before starting his life long journey into bodywork he received a a degree in psychology form the University of Albany in up state New York.  While in college Ari continued being the person in the dorms everyone would go to if they were hurting.  Regularly you would hear “how did you know that hurt” or “that’s amazing, what did you do”. His answer was always the same “I just listened to my hands and followed where they wanted to go.”

After college Ari went to the New School of Bodywork in Manhassett, NY. Three years later, after moving to San Francisco and realizing corporate America and he were not a match, he sat for the second offering of the National Certification in Therapeutic Massage and Bodywork (NCTMB). Successfully passing the NCTMB his journey led him to Las Vegas, NV where he helped open the Spa at the Luxor Hotel and Casino and later Canyon Ranch Spa in the Venetian Hotel and Casino. During his time in Las Vegas he opened his private practice inside Worlds Gym having the opportunity to work with world champion boxers and trainers. This is also where Ari first started working with MDs and DCs having positions in several medical establishments.

Ari started studying Ortho-Bionomy while in Las Vegas in 1998. After taking several classes over the next 2 years he decided OB is what he wanted to practice. That is when he first came to Monterey, to open the Spa at Pebble Beach as a massage therapist and dive into his studies of Ortho-Bionomy®. 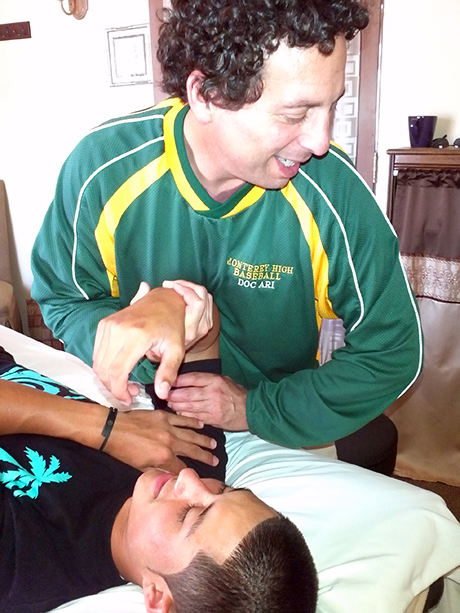 Since 2002 Ari has maintained a private practice in Ortho-Bionomy® while also working for periods of time in the offices of Dr. Peter Franklin, Dr. Stephen Barkalow and Dr. Abraham Kryger treating acute and chronic injury and pain. This was my internship.  It was in these offices that he learned how to apply his work to pain and injury in a clinical setting.  The opportunity to work with consistently a myriad of injuries, conditions, symptoms that people faced everyday was a blessing.  It was here that Ari started to form his ideas as to the “Whys” of pain and injury.

For the past 10 years Ari has volunteered his work with Carmel and Monterey HS Varsity Baseball teams working as an injury prevention and performance enhancement specialist while also taking care of acute injury. His work has helped his teams reach to several Central Coast Section (CCS) Championships and more importantly his pitchers have not sustained a repetitive motion injury in 10 seasons.  Go to Go to Old Age Starts When You’re Young page to read about why repetitive motion injuries occur and how they can be prevented.

His most recent expansion has been into the word of dogs.  The work applies itself to the same conditions in animals that humans face.  It is more for the soul than money.  Go to the Ortho-Bionomy for pets page to read a little more about it..

©2022 Ortho-BionomyUSA.com | All Rights Reserved | 831.915.8870
Ortho-Bionomy® and the Sand Dollar design are registered trademarks of the Society of Ortho-Bionomy International, Inc. and are used with permission.